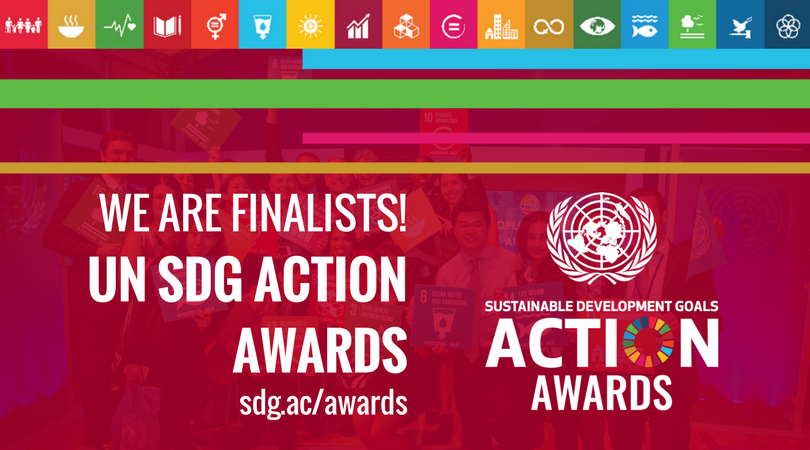 The 17 Goals. 1 School. And Minecraft project, led by Presentation College Bray and 80:20 Educating and Acting for a Better World as part of the Let’s Talk initiative, has been announced as a finalist of the United Nations SDG Action Awards in the visualizers category. The Awards recognize the most outstanding and innovative efforts to inspire action on the Sustainable Development Goals, a set of goals adopted by countries to end poverty, protect the planet and ensure prosperity for all as part of a new sustainable development agenda.

The Awards are powered by the United Nations SDG Action Campaign. Winners will be announced at the Awards Ceremony on 21 March 2018, during the second edition of the Global Festival of Action for Sustainable Development, the world’s annual gathering to catalyze action for the SDGs, happening in Bonn, Germany (21-23 March 2018). For more information on the Awards, go to sdg.ac/awards.

The 17 Goals. 1 School. And Minecraft project summary on the UN website puts the work of the people involved to date into context.

“The SDGs will only be reached if the goals and their targets can be meaningfully brought to life in a school community and not only at the tables of policymakers. Yet how often are young people invited to act on the SDGs?”

Accepting the challenge, this team sought to achieve sustainable development in a school in Bray, Co. Wicklow, Ireland, by recreating that school in a virtual world and redesigning it to align with the SDGs using the online game Minecraft.

The aim was to produce an open-world thinking platform to enable the whole school community to be involved in mapping environmental and social footprints with the potential of the SDGs.”

The Awards draw attention to the need to learn from change-makers from across the globe and celebrate the most impactful and innovative achievements contributing to the global sustainable development movement.

The first edition received over 740 nominations from 7 continents and 125 countries, ranging from Zambia to Fiji, from Benin to Norway, from civil society and grassroots initiatives to public sector and municipal government projects, as well as private sector engagements. Finalists are being carefully reviewed by 12 prominent figures within the global SDG community.

“The challenges we are facing are huge, but through this first edition we have we seen once again, that there are many people, businesses, organisations and governments creating positive change and having outstanding impact in their communities”, says Mitchell Toomey, Global Director of the UN SDG Action Campaign.

“We need to showcase and celebrate these bold and creative change-makers, learn from them and connect them to ensure they can scale and inspire others. In this first year of the UN SDG Action Awards, we have had outstanding competition and all should be immensely proud of what they have achieved”, added Toomey.

ABOUT THE 17 GOALS. 1 SCHOOL. AND MINECRAFT PROJECT

ABOUT THE GLOBAL FESTIVAL OF ACTION

Organised by the UN SDG Action Campaign with the support of the German Federal Ministry for Economic Cooperation and Development, the Festival connects an inspiring mix of business leaders, activists, UN representatives, academia, governments, innovators, global organisations, and the media from across the globe. Taking place in Bonn each year, the Festival provides a dynamic and interactive space to showcase the latest innovations, tools and approaches to SDG action and connect organizations and individuals from different sectors and regions to exchange, build partnerships, and make the impact of their solutions scale.

For more information, please visit the page of the festival and the Facebook, Twitter and Instagram accounts. The official hashtag for the event is #SDGglobalfest. The hashtag for the UN SDG Action Awards is #SDGawards.

ABOUT THE UN SDG ACTION CAMPAIGN

The UN SDG Action Campaign is a special initiative of the UN-Secretary General, administered by UNDP to create awareness about the 2030 Agenda, empower and inspire people across the world to achieve the Sustainable Development Goals (SDGs) while generating political will and to help make the Goals attainable by 2030. For more information, please visit http://sdgactioncampaign.org. 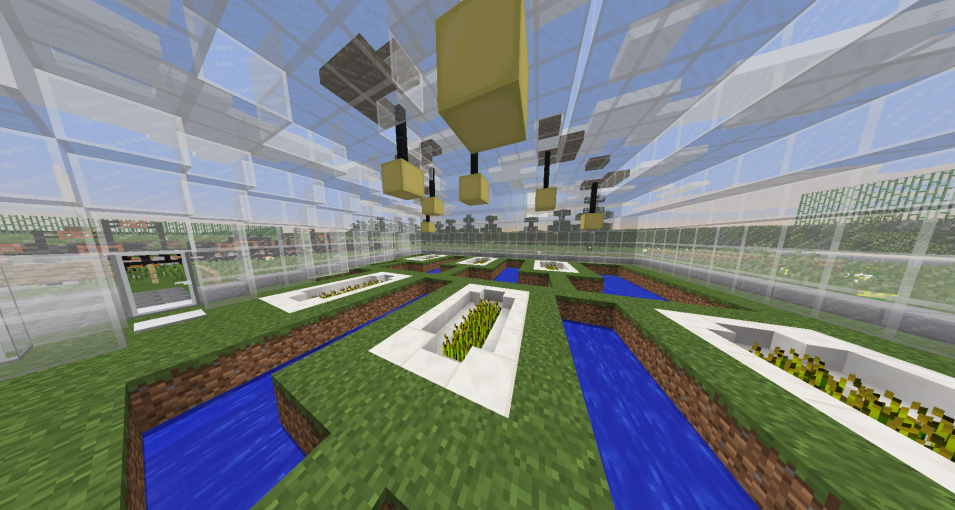 Darragh Domican reports from the frontline of a major whole-school exercise that used Minecraft to review how the Sustainable Development Goals agenda can challenge his school community in Presentation College Bray as part of the Let’s Talk initiative.

I’ve always believed that students are capable of much more than the sum of a few exams.

I was looking to get involved with one of the various school projects when my teachers, Clifton Rooney and Shane McInerney, approached me with an idea that was too good to ignore.

By using Minecraft, we could rebuild the school using ideas developed by students and teachers alike in imaging the possibilities of a school that was friendly toward the ambitions of the 17 internationally agreed Sustainable Development Goals. I was instantly interested as I felt the students had plenty of thought-provoking ideas on improving the school and the world. I signed up early on to work on the research team.

We were immediately tasked with researching the Sustainable Development Goals (SDGs) and getting to know what they were all about. To say we didn’t know much about the SDGs is an understatement. 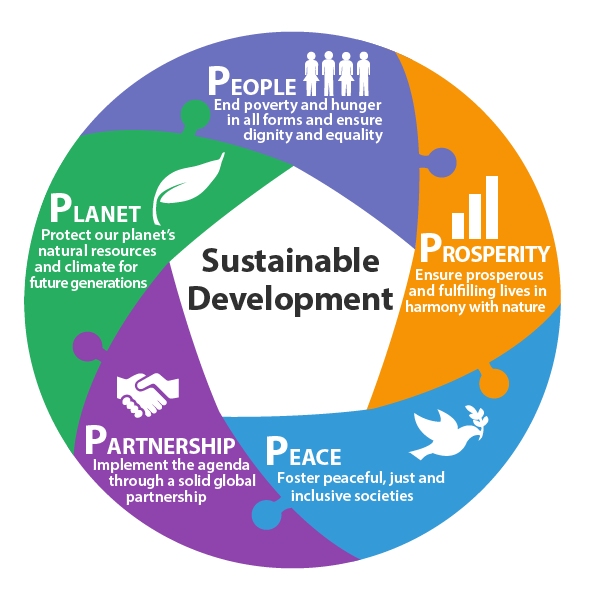 Before anything else, we took our time discussing what the SDGs are all about. Once acquainted with the goals and the “5 P’s” that underpin the goals, namely People, Planet, Peace, Partnership and Prosperity, we split up into smaller groups in which different tasks were to be completed.

At various times throughout the project the question of “why bother with the SDGs?” was asked. There are many responses to such a question, and all are relevant. A snapshot of some summary statistics gives us a sense of the context:

The SDGs are global goals that were agreed by the UN General Assembly in 2015, ranging from creating decent work and economic growth to implementing more quality education for everyone. They are about thinking forward in years to come (by 2030, to be exact) and creating a safe and better future. By implementing them into schools now, we can change the futures for students. Simply by talking about this project we are already leaving an example for other schools to follow.

Working with my team mates, we were tasked with coming up with ideas that would make the school more sustainable. As each SDG is underpinned by one of the “5 P’s”, each idea therefore relates back to each of them as well. These links are crucial to the project and the school community.

Minecraft and 104 ideas for change

We cooperated with the building team throughout the project. Any challenges we faced presented new ways of looking at and thinking about our work. Communication between the research team and the builders was crucial to produce the amazing work done by the building team. We found that the builders themselves also came up with ideas we had not thought of. These ideas were also added to the final build. It took one week of building before the build was complete. I have come out of this project with a different view on certain things in life but mainly on the education we receive in school in the present.

Why do the SDGs matter to the school and to students? 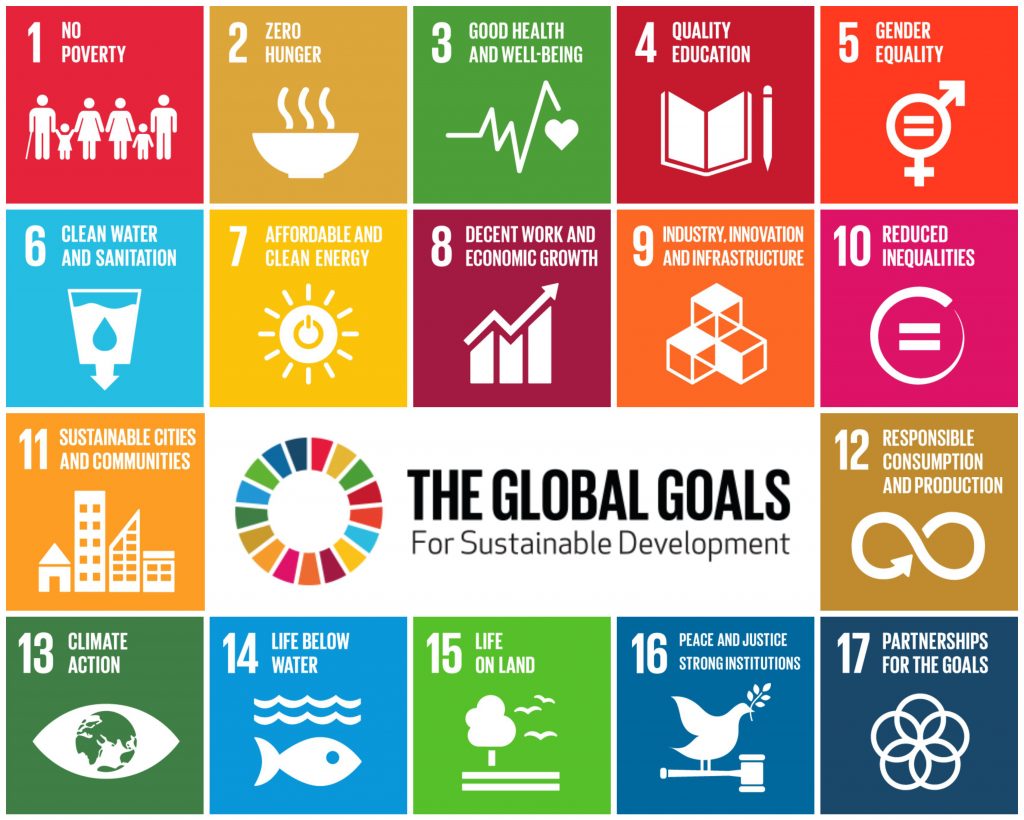 We are familiar with the many problems and inequalities between the developed and developing world, but students in our school can relate to many of these problems too. Broader concepts underpinning the Sustainable Development Goals such as no poverty and peace, justice and strong institutions, may seem irrelevant in the school environment, but we found that many of our students suffer from problems that are often hidden from plain sight.

By looking at, and researching the SDGs, we were able to dig into many of the unknown problems faced by the students of Pres. By liaising with other students and even teachers we were able to break down many problems and explore ways in which we could solve them. As the SDGs are so far reaching we found them useful in helping us to locate the root of problems locally and further afield.

Key issues students face in relation to the SDGs

Out of the 100+ ideas suggested by the student-led research team, some of the key issues brought up by the students included problems with nutrition, consumption and hunger. The idea of a breakfast club and variety in food was discussed and ultimately implemented by the builders.

Other problems raised and addressed by the project team included:

What was actually done and what impact to the school, Bray, and beyond

Out of the many changes made to the school in the virtual world, one of the most aspirational projects was the underground ‘sustainability centre’. Senior student builders set out to create an area underground under one of the rugby pitches that would be entirely self-sustainable. This area would offer a comfortable and open learning environment where other people in the local community could partner with the school. Therefore this area would be a shared space between the school and beyond.

Another interesting and large scale change was made to the second floor of the main building. Classrooms were removed to be replaced by a more open plan area which offers independent learning and discussion groups. Students now have more freedom to choose what to learn. The area overall would be a less stressful and more relaxed learning environment, emphasising student ownership over their own learning.

All changes may not see the light of day in our time in school, but through exploring ideas with many other students in this project, we wish to leave a new standard of school to future generations to share, build on and make an example for others of the possibilities of what one school can do in striving to make a better world.

This project is being used to imagine a world where partnerships, equality, and peace are at the forefront. Students have begun to ask questions about our world and their contribution to it. We won’t always be students. In time, we will be the decision makers and in learning about our interdependence and responsibilities to each other and our planet, we want to create more sustainable footprints than many who have walked before us.